M.Chat (also known as Monsieur Chat and Mr Chat) is the name of a graffiti cat that originally appeared in Orléans, France in 1997. It is a kind of graffiti art. The artist was originally anonymous, but in 2007 Thoma Vuille was caught in the act of creating the cat. The graffiti appeared most frequently on chimneys, but was also sighted in other places, such as train platforms and at political rallies. This graffiti cat began in France and it spread to Europe, USA, Vietnam, Korea as graffiti art. Premium value that you can feel in your hands A&futura SE100 shows our dedication to provide both premium quality and value to our listeners including an eye-catching design. It features a 5-inch touchscreen, Octa-core CPU, and the best audio performance in its league. Astell&Kern is committed to delivering the original performance as the artist intended you to hear and the SE100 is a symbolic example of this vision and effort. A&futura SE100 introduces an 8-channel DAC chip. 8-channel DACs have previously only been available for premium home audio systems, pro-audio workstations, and recording studio equipment. It is making a debut for the first time in an Astell&Kern portable system. Your favorite tunes will now sound fundamentality different with even greater dynamic range and refined sound. There are many audio companies that talk about 'technologies', yet Astell&Kern is the only brand that talks about 'progress' in the audio experience.

The ESS SABRE PRO series of Digital-to-Analog Converters (DAC) is targeted at premium audiophile and recording studio equipment. The SABRE PRO series sets a new benchmark in high-end audio by offering the industry's highest dynamic range (DNR) with impressively low levels of total harmonic distortion plus noise (THD+N) in a 32-bit, 8-channel DAC. All PRO SABRE DACs feature ESS's patented 32-bit HyperStream DAC technology which delivers outstanding sound quality and industry leading performance. It is common knowledge in the audio industry that the amplifier plays a critical role in Hi-Fi audio systems. The latest know-how and amplifier design technologies developed by Astell&Kern have brought 4.1Vrms of balanced output power with minimal noise. As the output power increases, the noise fluctuates louder as well. However, A&futura SE100 shows 123dB of SNR (Signal to Noise Ratio) at 4.1Vrms of audio output. At the same time, the noise level on single-ended is even smaller, it produces 122dB of SNR. Pure sound is the result in our technical achievement allowing for powerful, yet clean sound to be delivered gracefully by the SE100.

An enhanced voltage-controlled crystal oscillator (VCXO) high-precision clock has been utilized in the A&futura SE100.
The reference jitter of Astell&Kern's implementation has improved performance to 800fs (femto seconds), meaning that the SE100 faithfully reproduces your music by precisely measuring and accurately timing the synchronization of all instruments, vocal and even ambience sound recorded in your digital music file together.

The A&futura SE100 is equipped with an octa-core CPU which allows the player to produce the exact musical detail present in the original recording without distortion and provides a quick, lag-free operation.

Next generation USB Type-C support allows file transfer speeds up to 10Gbps and supports both data transfer and charging from the same cable.USB 3.0 protocol transfers data twice as fast when compared to other Astell&Kern players.
Charging with a fast charger (at 9V/1.67A) takes only two hours and allows up to 11 hours of continuous playback.

The Power House KANN ALPHA, the third product in the KANN series of Digital Audio Players. While the goal of the ...
Любими
2 299,00 лв.

M.Chat (also known as Monsieur Chat and Mr Chat) is the name of a graffiti cat that originally appeared in ...
Любими
3 599,00 лв. 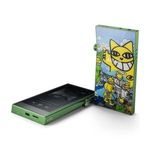 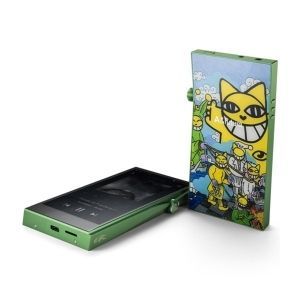